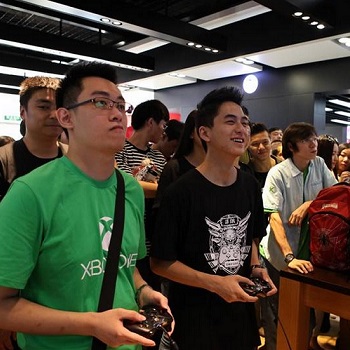 Xbox One launches in China after a 14 year ban on foreign consoles. Finally, Chinese gamers can play Kinect Sports Rivals.

There are people in China today playing on an Xbox One who weren't even born when the last major console launched in the country. Fourteen years ago, the Chinese government ministries banned the sale and production of foreign game consoles due to the perceived effect they had on children. Today, Microsoft released its most recent platform, the Xbox One, in 37 cities in China.

Censorship criteria were released by the ministries a few months after the government lifted its ban on foreign video game consoles in January 2014. A focal point of the criteria is to prevent any content that could harm China's image, so it's not likely that Battlefield 4 will be available.

Games have already adjusted to prevent creating tension with China, even before the ban was lifted. Homefront shifted its antagonist from China to North Korea, and it launched in 2011. Could the potential of selling to the enormous Chinese market cause more games to adjust to pass the government's censorship criteria? Those criteria also address obscenities, insults, and racial/ethnic hatred, so it wouldn't be terribly surprising to see more games tone down that content to reach the wider market.

PC and mobile gaming have thrived in China while the ban prevented Sony, Microsoft, and Nintendo from releasing hardware in the country. Nintendo hasn't stated any intention to hit the Chinese market, but Sony will bring the PlayStation brand over eventually.

The Xbox One launch was expected last week, but was hit with an unexpected delay on launch day. The first Xbox launched in 2001, a year after the ban began, making the Xbox One the first Microsoft console officially sold in China.

The hardware release is part of a partnership between Microsoft and BesTV. Companies are permitted to sell consoles that are manufactured in Shanghai's free trade zone.