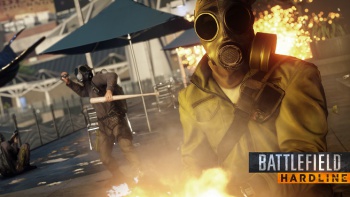 After a painful, bug-ridden launch to Battlefield 4, Visceral Games is confident Hardline's launch will have no major problems.

Speaking with Game Revolution, Visceral Games creative director Ian Milham said, "What you're basically asking is, 'Is your game going to work?' And the answer is yes, it's gonna work."

Battlefield 4 launched to persistent connectivity issues and bugs across all platforms, dealing a blow to the online multiplayer of the game. Battlefield 4 developer DICE stated its reputation had been damaged, which they had expected considering the game's launch. EA CEO Andrew Wilson called the launch "unacceptable."

DICE general manager Karl-Magnus Troedsson said in June that the failures of Battlefield 4 triggered a new development process for Hardline. Fixes to Battlefield 4 were immediately taken into consideration for Hardline

Battlefield: Hardline will launch on five platforms, so Visceral Games knows something will mess up, but Milham is confident there will be no major problems. Hardline has been running at trade shows without crashing, he pointed out.

"We actually started on this more than a year before Battlefield 4 came out," Milham said. "We've been working with the DICE guys for a long time; some of our engineering work is actually in Battlefield 4 and things they've been doing since then. It's in pretty great shape now and all that work is gonna come into what we're doing.