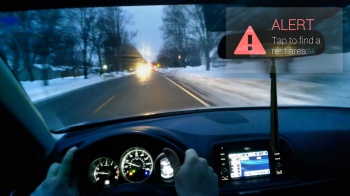 According to a recent study, driving with Google Glass is a little bit safer than using a smartphone. (But still super unsafe.)

There are some scientific studies out there that occasionally fall into the "why bother studying this" spectrum. One such project was carried out by the University of Central Florida to determine whether driving a car while using Google Glass was comparable to driving with a smartphone. It's already been well-determined that glancing down at a phone while driving is a distraction that can lead to horrible, and even fatal, accidents. By that logic, wearing a computer on your face should prove an equally dangerous distraction, if not more so.

But we still need to do such studies in case the data surprises us. This study is a great example: Driving with Google Glass is still a distraction, but such drivers perform better than if they were using a smartphone.

Before we continue, let's take a moment to remember that driving with Google Glass is a very bad idea that might get you killed and you shouldn't take that risk. Finished? Okay, moving on.

For the study, UCF researchers took 40 twenty-year-olds and put them in a driving simulator with either a smartphone or Google Glass device. Participants were then forced to react when a vehicle ahead of them slammed on the brakes. UCF then compared the reaction times with a control group that was driving without multitasking.

The bad news is that Google Glass users were no quicker at hitting their brakes than someone with a smartphone. The good news is they recovered more quickly, and returned to normal driving faster than the smartphone group. Presumably this result is caused by the hands-free nature of Google Glass combined with the driver being able to see through the display.

That being said, the negative effects on driving still outweigh the positive. "While Glass-using drivers demonstrated some areas of improved performance in recovering from the brake event, the device did not improve their response to the event itself," said UCF researcher Ben Sawyer. "More importantly, for every measure we recorded, messaging with either device negatively impacted driving performance. Compared to those just driving, multitaskers reacted more slowly, preserved less headway during the brake event, and subsequently adopted greater following distances."

On the plus side, these results could be applied to future research to make smart technology use safer on the road. After all, despite the hazards and illegality of distracted driving in many states, drivers still insist on using smart devices in their vehicle, leading to 1.6 million crashes a year. If we can't prevent people from using smart devices while driving, it may be possible to make smart devices safer. On that score, Google Glass could mark a very tiny step in the right direction.

"As distractive influences threaten to become more common and numerous in drivers' lives, we find the limited benefits provided by Glass a hopeful sign of technological solutions to come," Sawyer explained.