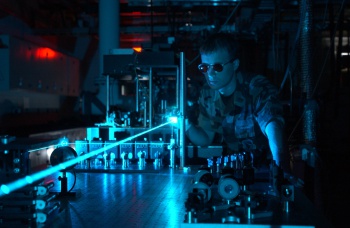 Physicists from Imperial College London and the Friedrich-Schiller-Universität Jena have developed a laser capable of switching on and off 10 times faster than was previously possible.

In a new paper published in Nature Physics, a team of scientists reported the results of their experimentation with record-breaking laser technology. Using an incredibly thin wire just 120 nanometers wide - a human hair is about 90,000 nanometers wide - and the concept of "plasmons," the team shrunk a laser into a much more tightly focused beam than usual. This tighter focus made the beam interact with the wire more strongly, which accelerated the rate at which the laser could be turned on and off by a factor of ten. In terms of the speed at which they can be turned on and off, these are the fastest lasers ever recorded.

Lead author Themis Sidiropoulos, who is currently completing his PhD in the Department of Physics at Imperial College London, explains that the implications for communications technology are important. "Turning a laser on and off quicker means more information carrying 1s and 0s per second, allowing much faster data communications," he says. "In fact, these lasers are so much faster than conventional electronics that we had to develop an optical switching method to measure their speed."

A plasmon is a discrete oscillation of plasma - a wave-like motion of excited electrons. Interactions between light and matter are generally slow, but when light binds to these oscillations, these interactions are accelerated. Plasmons occur on the surface of metals, and the team placed their nanowire on a silver plate to generate plasmons.

This new record may be a lasting one. PhD student Robert Röder, from Friedrich-Schiller Universität Jena believes that the team reached the physical limits of how fast the laser can be turned on and off. "This is not only a 'world record' regarding the switching speed," he said. "Most likely, we also achieved the maximum possible speed at which such a semiconductor laser can be operated."