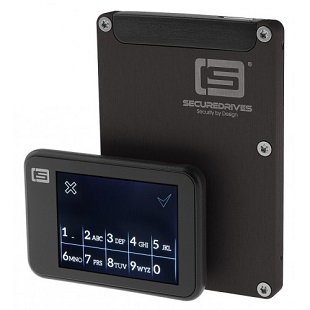 One word leads to doom for your data.

Thankfully there's someone out there that's more obsessed with information security than Dale Gribble and Edward Snowden combined, and now you can wipe your solid state drive with a simple, coded text message.

SecureDrives SSD is a SATAII (3 Gbps), 128 GB model -- not exactly the hottest in terms of specs -- but its security features come right out of a Mission: Impossible flick. Called the Autothysis128, the drive has a built-in GSM radio that allows it to receive text messages virtually anywhere in the world (GSM is by far the most ubiquitous cellular radio tech available). The drive can be set up to self-destruct (fragment, not some sort of rad explosion) in several scenarios, including if the GSM signal is blocked by an outside force, the incorrect PIN is entered too many times, or if the tamper-proof case is compromised.

Most notable is the Token feature, which pairs the Autothysis128 with a physical security fob. The fob, charged by USB 2.0, can send a text to the SSD; if the right code word is sent to the drive, all data is permanently destroyed via fragmentation. You can also pair the drive with two fobs, keeping one at each end of a drive transfer. If your hired courier is jacked by the local Yakuza gang, your data remains safe.

Outrageous scenarios aside, the Autothysis128 is the most secure hard drive I've ever seen (drop alternatives in the comments if there's something crazier). But with a pricetag of GBP $1,027 (over USD $1,600)? This is not security for the common man. For now, encrypting your drive outright will probably get the job done, assuming you aren't sitting on plans for the forthcoming Cyberdyne T-101 blueprints.