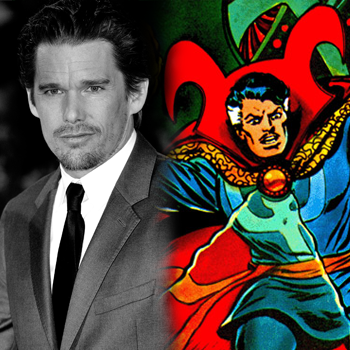 Marvel Studios apparently really, really wanted Joaquin Phoenix to be Doctor Strange. But the famously mercurial actor was reportedly unsure about committing to a Marvel-style multi-film contract - in fact, some have suggested that a last-minute inability to secure Phoenix's participation early on is what led to Marvel's uncharacteristically underwhelming SDCC showing earlier this year.

Now, This is Infamous claims that Marvel has moved on from Phoenix entirely; and that their new top choice is another quirky but familiar face: Ethan Hawke.

If true, the rumor makes a lot of sense. On paper, Hawke is exactly the type of leading-man Marvel has largely pursued: An established name but not "A-list" expensive, likes to split his time between moneymaking genre movies and prestige indie features, currently "hot" from the critical/festival success of Boyhood. Most notably of all, though, is that he has history with Strange writer/director Scott Derrickson - they teamed for the horror hit Sinister back in 2012.

There has been no comment from Marvel, Hawke or Phoenix at this time.

Source: This Is Infamous