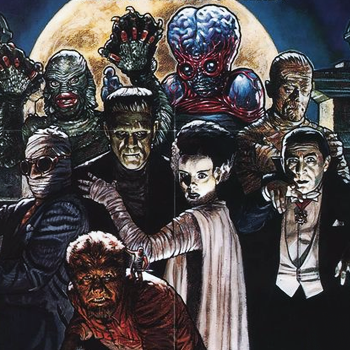 In the time between greenlighting and completing the vampire origin-story Dracula Untold, Universal Pictures decided to take the rest of their Universal Monsters franchises in a different direction - drafting Roberto Orci and Alex Kurtzman to devise a series of new present-day reboots of the classic characters which can be tied together into a shared universe for crossovers and team-ups in the style of the Marvel Cinematic Universe.

It was presumed that Luke Evans' Dracula from Untold (which will be released in U.S. theaters next week) would not be part of this new strategy, as the film was set up before the Orci/Kurtzman deal. However, Badass Digest reports that Universal has shot new scenes for the film which will allow Dracula Untold to count as a prequel to the "Monsterverse," which was previously set to begin with a new update of The Mummy. It is not known whether these changes are designed to allow Evans to reprise the character.

Dracula Untold is a fictionalized retelling of a 1460 military campaign for which Vlad Tepes III (aka "Vlad the Impaler") - the historical figure on whom Brahm Stoker based Count Dracula - gained his initial fame. In this version, Tepes seeks to gain supernatural powers to aid in turning back an Ottoman invasion of Wallachia, powers which will ultimately transform him into the vampire Dracula.