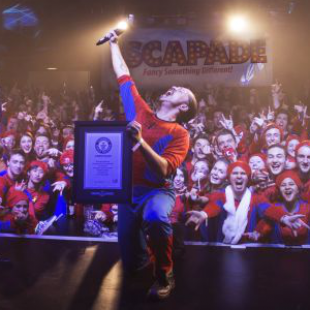 Last night in London, 398 university students dressed up in Spiderman costumes to set a Guinness World Record for Largest Gathering of People Dressed as Spiderman.

Escapade Fancy Dress, a business in London selling costumes, organized the event as a part of a student event in London. Escapade provided Marvel-licensed Spiderman costumes it obtained from costume designer and manufacturer Rubies UK.

Escapade held a similar event last year to set a world record for Largest Gathering of People Dressed as Superman. This year the company chose Spiderman to reflect real life heroes since Peter Parker started out as a regular guy.

Event organizers asked participants to donate money to Help for Heroes, a UK military charity. Escapade has not disclosed how much money the event raised yet; the company has stated it will reveal that information this weekend on its event page. Escapade estimates participants donated several hundred pounds to the charity.

Escapade worked with Student Central, a membership that offers activities and sports for London students for the event, for the week-long Fresher's Fayre, a series of events to welcome students. Students participating received a Spiderman costume for free.

In attendance was Jack Brockbank, an official Guinness World Records judge. He confirmed the world record at 8:40 p.m. and presented Escapade a certificate alongside Help for Heroes representatives.

"Starting university is a big time for students but events like tonight's is what makes the whole thing so special," Steve Harwood, Student Central's staff administrator and performance manager, said in a prepared statement. "It was a great turnout, and our members really loved the chance to put themselves in the history books."