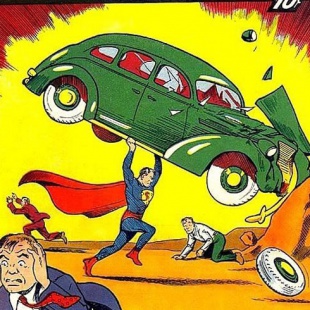 Yesterday, the United States Supreme Court made decisions on which cases it would agree to hear during its just-started session. The big news, of course, is that the court opted not to hear arguments in any of the cases involving same sex marriage, which means gay unions are now officially legal in 5 more states. But obscured by that awesome turn of events is the court's decision to deny a petition by the Joe Shuster Estate, securing DC's ownership of Superman for the rest of the copyright's life.

Joe Shuster, of course, is one half of the duo that created Superman in 1938. The legal battle here centered on a 1992 deal between his estate and DC comics, reached one year after Shuster's death. DC paid out more than $600,000, covered Shuster's remaining personal debts, and granted his sister and brother a yearly pension of $25,000, in exchange for the family giving up all claims to the Superman copyright. However, Shuster's nephew, Mark Peary, took issue with the deal, and in 2003 he filed a copyright termination notice in accordance with the 1976 copyright act.

After years of winding through courts, last year the ninth circuit court of appeals declined to give the Shusters a full hearing, asserting instead that the deal reached in 1992 voided any further claims the family might have. In June of this year, the Shusters filed a petition with SCOTUS, and by declining to consider that petition, the Supreme Court has effectively agreed with the lower courts on the matter.

If all of this sounds familiar, it should, as the Jack Kirby estate attempted the same thing with regard to copyrights owned by Marvel. And like the Shuster family, the Kirbys repeatedly lost in court after court. The difference between the two groups, however, is twofold. First, Kirby's family changed their tactics slightly earlier this year, arguing in their recently rescinded petition to the Supreme Court that the issue at stake was that Kirby was, ultimately, wrongly classified as a worker for hire. And second, the Kirby family never reached any kind of deal with Marvel comics prior to initiating legal proceedings.

These reasons might be why Marvel opted to settle with the Kirby estate for an undisclosed, but surely enormous sum. Clearly, Marvel had reasons to believe that that Kirby estate's case might have had merit. DC, on the other hand, could simply point to the deal it had reached two decades earlier. The company had already settled with the Shusters.

This doesn't completely bring DC's potential woes to an end, of course. There is a related case involving the Jerry Siegel estate's claims to Superman (though that case is likely to end in the same way.) Additionally, in 2014, the surviving family of Batman co-creator Bill Finger have dramatically increased their efforts to achieve official recognition for his work. In May, Finger's granddaughter hinted at legal action in a press release that said, in part, "I am currently exploring our rights and considering how best to establish the recognition that my grandfather deserves."