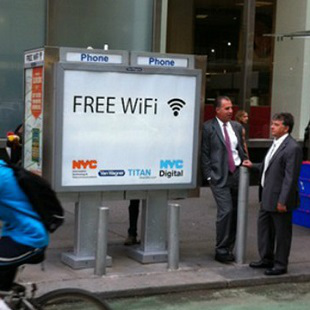 NYC City Hall now wants the beacons removed, even though the city government approved the initiative.

Bluetooth beacons that were discovered in hundreds of New York City payphone booths will now be removed, despite the deployment being approved by City Hall.

BuzzFeed reports that Titan, a firm that controls thousands of payphones and their ad displays across the city, placed several hundred Bluetooth beacons in payphones under its control. The beacons, which were approved by NYC's Department of Information Technology and Telecommunications (DoITT), were supposedly placed purely for "maintenance purposes only."

The beacons were installed in Fall 2013, meaning they've been active for nearly a year already. Whatever their original proposed purpose was, Titan has admitted to using the Bluetooth beacons to trigger ad rotation on the aforementioned phone booths, as well as to push advertising to smartphones directly. The latter recently came in the form of pushed ads during the Tribeca Film Festival.

After BuzzFeed's report broke, the DoITT said all Bluetooth beacons would be removed immediately. 500 beacons are in play, and while their exact locations aren't known publicly, the report says most of the hardware is in lower Manhattan.

These Bluetooth beacons represent a serious potential invasion of privacy and security; even if people in the area don't opt-in for smartphone ads, the beacons can still track phones and devices in the area that have Bluetooth turned on. If you're using wireless headphones, or a headset with your smartphone, that likely includes you. The Bluetooth tracking can tie into specific apps (again, with user opt-in), and at the very least can tell the ad displays when a given number of people are within viewing range of the ads, triggering rotation.

Along with advertising displays and Bluetooth beacons, Titan is also one of the firms responsible for WiFi hotspots based in NYC payphones. Such WiFi, once widely implemented, is sure to operate like WiFi in airports (ad-supported), so this disaster could have long-reaching consequences for the firm. The city also has some questions to answer, as the beacons were placed without any sort of public notification, or discourse.