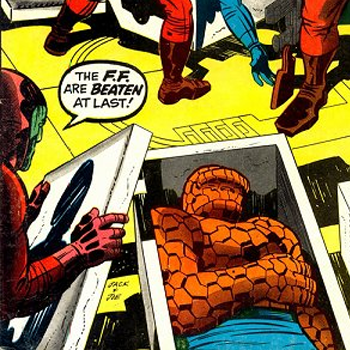 Marvel reportedly ends the story of their "First Family" - did they do it to spite the new movie?

It's been the subject of industry gossip for months, but now it seems to have come to pass: Comics news site Bleeding Cool reports that new distributor-solicitations confirm that Marvel Comics is cancelling Fantastic Four at the end of the year. The solitication (from Hachette) is as follows:

THE END IS FOUREVER! Witness the closing act on the First Family of the Marvel Universe! THE INVADERS meet the FANTASTIC FOUR as the hunt for REED RICHARDS and the missing kids of the FUTURE FOUNDATION continues. Meanwhile the mastermind behind everything unveils his ultimate plan. But how does FRANKLIN RICHARDS factor in? And how does this all lead to...The END?! Collecting FANTASTIC FOUR #642-644 and the Triple Sized Final Issue 645!

Not confirmed (but more heavily-rumored than ever) are the reasons why Marvel would choose to cancel the title credited with launching not only the company but the Silver Age of Comics in the 60s. Speculation and "insider" gossip has long suggested that the cancellation is the chiefly the desire of Ike Perlmutter, the famously-private (and reputedly mercurial Chief Executive of Marvel; who is said to be against "promoting" any characters or franchises whose feature-film rights are still owned by studios other than Marvel.

Fantastic Four film-rights currently reside at Fox, as do the X-Men - which has also seen its merchandising presence at Marvel drastically reduced amid the disputes between the two studios. There has not yet been a statement from Marvel as to the cancellation itself or whether it was motivated by a desire to minimize Fox's film version.