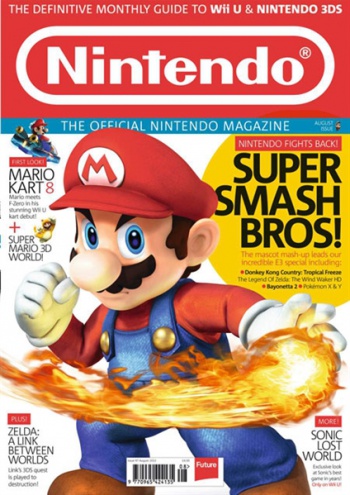 Nintendo has transitioned to reaching its consumers directly through social media and Nintendo Directs.

Nintendo UK and publisher Future have confirmed the UK-based publication Official Nintendo Magazine will end with the release of its 114th issue on October 14. Nintendo has chosen to focus efforts of communication elsewhere while Future will focus on other websites.

Nintendo and Future approached this decision together. A sentence from the statement, absent from Official Nintendo Magazine's page, called the closure a "joint decision."

Nintendo Power Magazine, the US equivalent of Official Nintendo Magazine, also published by Future, closed in 2012.

The publication's website will close on November 11 and will then redirect to Nintendo UK's website. Staff will move to work on other projects within Future.

"Nintendo will continue to speak directly to fans via Nintendo Direct, our social media and online channels and public events," the Official Nintendo Magazine stated.

Nintendo has moved away from publications to reach consumers. At E3 this year, Nintendo again chose to speak to consumers through their Nintendo Direct presentation rather than a press conference. With social media like Twitter, Facebook, and the Direct presentations with Treehouse, Nintendo reveals game announcements and details itself instead of working closely with publications.

The longer statement includes a Q&A concerning the closure. Future was in the news earlier this year for its global restructuring, declaring redundancies. Future stated Official Nintendo Magazine's closure is unrelated to Future's redundancies.