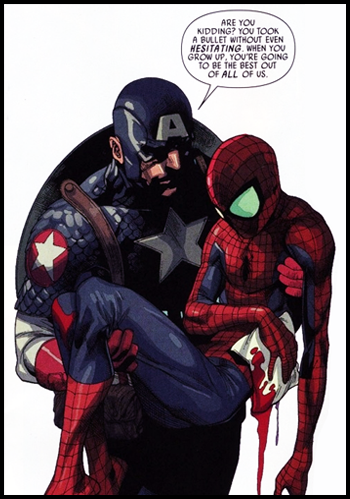 Sony's contractual obligation to make a new Spider-Man movie every three years in order to retain rights to the character but lack of success in turning those films into solid franchise-building hits is the biggest broken record in Hollywood - but the studio might be looking to play a new tune.

On Monday, reliable HitFix journalist Drew McWeeny passed along some industry gossip on the subject, namely that Sony is talking to Marvel about "opening up some connections in the onscreen Marvel movie universe" in a way that would help boost the profile of Sony's troubled franchise. One day later, Badass Digest's Devin Faraci reported that collaborating with Marvel is one of many ideas Sony is considering for the character - with others including replacing Andrew Garfield with a new actor in order to reboot the series again with the Sinister Six movie.

Now, Entertainment Weekly has weighed in on the story, citing their own anonymous sources who claim that while talks are happening, it doesn't involve any immediately in-production projects at either studio - despite Marvel still having several unidentified "Untitled" projects set for release over the next several years and rumors that Avengers 3 may feature an entirely new roster of heroes (in the comics, Spider-Man has been part of various Avengers teams since the controversial New Avengers relaunch in 2005.)

While Marvel has tense relations with studios like Fox over license agreements for X-Men and Fantastic Four, the Spider-Man situation is unique: While Sony retains rights to produce feature films starring the character, Marvel controls all merchandising and television rights - meaning that the (declining) box-office of the franchise is the only element "in play."