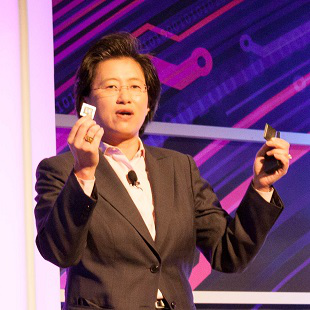 In what many consider a surprise overnight move, AMD has ousted current President, CEO, and board member Rory Read, and replaced him with former COO Dr. Lisa Su.

Su will take over as President and CEO immediately, while Read will remain with AMD through the end of 2014 in an advisory role. Read exits the positions after three years as AMD's chief executive.

Read's tenure with AMD has had both successes and failures. While AMD's x86 server chip market share has dropped into the low single digits, and its presence in the laptop/notebook space has also suffered, Big Red has its APU (Accelerated Processing Unit) hardware inside both the Sony PlayStation 4 and Microsoft's Xbox One. Its graphics hardware is used in Nintendo's Wii U console as well, alongside an IBM PowerPC CPU. Its APU business is stronger than ever, too, thanks to an emphasis on graphics punch alongside multi-core CPU design.

Dr. Su has a long history in the semiconductor space, earning her doctorate in electrical engineering from MIT. She has served in management and executive roles with AMD, Freescale, and IBM, and has a strong background in mobile -- something desirable if AMD decides to make an aggressive push into the smartphone, tablet, and ultraportable arenas.

Now that the executive shuffle is out of the way, let's talk hardware, shall we? In the wake of Nvidia's GTX 900 series launch, AMD has decided to slash prices on its R9 290 and R9 290X graphics cards.

These price adjustments put AMD's top-end single-GPU offerings alongside the $329.99 GTX 970, and $499.99 GTX 980. The group is now a well-rounded price-performance quartet, and anyone looking for a high-end/flagship GPU should be able to find exactly what they want now.