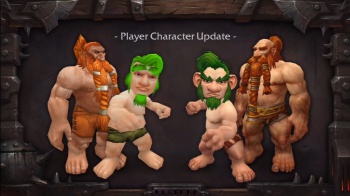 Remember those updated player models for World of Warcraft's oldest, most out-dated races that were promised with the Warlords of Dreanor expansion pack? Well, good news everyone! We'll be getting them a little early, and they will be made available to all World of Warcraft players, not just the ones who buy the expansion.

The upcoming 6.0.2 patch will introduce completely revamped character models for the Dwarf, Gnome, Human, Night Elf, Orc, Tauren, Troll, Undead, and Draenei races, as well as a host of other new features and content. It is the "pre-expansion" patch, so it will also be implementing a lot of behind-the-scenes stuff to get the game ready for when Warlords of Dreanor launches next month.

The full changelog is absolutely massive, but a quick rundown of the most major features include:

There's essentially something there for every single class, and every kind of player. It's a pretty big patch, and the fact that it's free for everyone instead of being including in the expansion is a nice gesture.