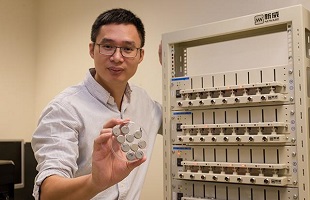 The battery in your mobile device hasn't changed much since the smartphone first took off in the last decade. For now, the secret to longer battery life is to cram more capacity into a similarly-sized device, while the tech inside hasn't actually evolved. Your display, RAM, audio, and processing power all go up year-over-year at a considerably higher slope than the tried and true (and tired) Li-ion battery pack.

But a meaningful breakthrough has appeared on the horizon, if the findings of Nanyang Technology University and its Professor Chen Xiaodong hold any water. The new rechargeable battery pack is still Lithium ion (Li-ion), but it's capable of going from dead to a 70 percent charge in roughly two minutes -- a feat that takes 80-90 minutes with today's average smartphone. Furthermore, the prototype battery can be recharged up to 10,000 times, a dramatic increase from the 500 cycles (two to three years) that current packs are capable of.

The secret? A gel made with titanium dioxide nanotubes, which replaces the graphite anode (anode being the negative pole in the battery system) found in virtually every Li-ion pack today. Titanium dioxide nurtures quicker chemical reactions in the battery system, which leads to the advertised fast charging. And the compound is easy to find, as it naturally occurs in soil, and is used in everything from sunscreen to food coloring.

Not only does the titanium dioxide alternative charge quicker, and last longer, but it doesn't need any sort of binding additive (electrolytes, for example) that are typically required in Li-ion packs. No additives means more room for the anode substance, which leads to more energy in a given space/battery pack.

This is all in the lab experiment arena now, and the findings are the result of a three-year study. Along with attempting to manufacture prototype batteries on a larger scale, Professor Chen and the university have said the technology is already being licensed by a company, and batteries based on the tech could hit the market within the next two years.