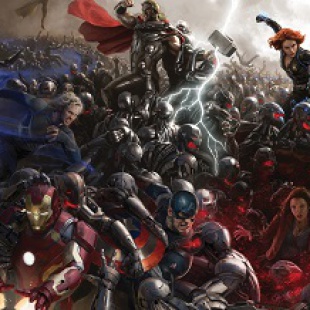 The Iron Man star is going to be Captain America's antagonist this time out. Yep, it's Civil War time.

Marvel's famous thriftiness may be coming to an end, as the company appears to have shelled out the necessary money to secure Robert Downey, Jr.'s services in the Marvel Cinematic Universe for a bit longer than anticipated. If this pans out, it's huge, earth-shattering news for the 2016 moviescape, and it likely has Warner Bros. looking for Depends right about now.

The news earlier today that Marvel is planning a new Civil War storyline in its line of comics? Yeah, that wasn't a coincidence. Variety is reporting that the Iron Man star is set to receive a $40 million payout to costar in Captain America 3 and what's more, it's bigger than a mere one-off. According to Variety, all of this came together after an internal fight over RDJ's desire for a role meatier than a cameo in Cap 3. That Marvel opted to pay out is interesting, particularly with the recent Jack Kirby settlement in mind. It would appear the studio is beginning to feel a bit more confident about the company finances.

Reportedly, the plan is for Cap 3 to feature some version of the Marvel Civil War as the two end up on opposite sides of the superhero registration act that requires all super-persons to get licensed by the Government, or face arrest. In the film, as in the comic story, Captain America is against it, seeing it as a violation of inherent civil rights, while Tony Stark is decidedly pro. This puts them on opposite sides of the law and essentially makes them enemies, somewhat. Further, the idea is that RDJ's new place within in the MCU could extend to future films as well. Steve Rogers supposedly goes underground along with other, as-yet unnamed superheroes by the end of Cap 3.

Note that this comes less than two weeks after a flurry of Marvel rumors suggested gigantic plans for the next 5 years. Supposedly, Marvel has been nervously eyeing the end of both Chris Evans and Robert Downey, Jr.'s contracts and is seeking a way to extend them, at least long enough for new popular characters that can ably replace Iron Man and Captain America once they're gone. One rumor held the plan might be to split Avengers 3 into two films, though that's technically illegal. However, Badass Digest ran with a rumor that the plan was to stretch things out by having an almost entirely new team of Avengers in Avengers 3, with the final appearance of the original avengers together as a group to be saved for either Avengers 4, or an even bigger crossover event involving all aspects of the Marvel Cinematic Universe.

To be clear, even bigger is on the level of Secret War or The Infinity Gauntlet.

Today's news would seem to confirm that Badass Digest is correct, though with a twist. As Chris Evans has been fairly adamant about wanting to largely retire from acting once is stint playing Captain America is up, it looks like Captain America will be absent from Avengers 3 so he can be saved for a later, bigger appearance. Meanwhile, Marvel has paid the willing Robert Downey, Jr. to stick around a bit longer. Badass Digest's Devin Faraci confirms he's been sitting on today's news for a couple of weeks, adding that Cap 3 will be called either "Civil War" or "Fallen Son." We'll just quote the rest:

More than that, Marvel is looking at Cap 3 as Avengers 2.5. It's going to be another ensemble picture, and it could feature Cap's new team from the end of Age of Ultron. Last I heard (and they haven't shot this scene yet, so it could change) that team is Falcon, War Machine, Quicksilver, Scarlet Witch and Black Widow, as well as probably The Vision (although I have been told Black Widow will not be much of a presence in Cap 3). And once again the events of a Captain America movie will reshape the Marvel Cinematic Universe.

Remember when I told you Cap wouldn't be in Avengers 3? This is why. At the end of Cap 3 the Marvel Cinematic Universe will be in a tough, dark place, with the heroes scattered and defeated. That will continue through Avengers 3, and it will leave the world open to the threat of Thanos in either Avengers 4 or the big universe-wide team-up movie, whichever comes first.

How closely will Captain America 3 tie in with Avengers 3? I've been told that the Russo Brothers are in talks to direct Avengers 3 and possibly 4. Sources tell me that they're the favorites of Marvel right now and that they are the guys Kevin Feige want to pick up the mantle from Joss Whedon.

This would be what you call a huge deal.

In case you've forgotten, this is the film that Marvel used to bully Batman v. Superman: Dawn of Justice out of the plum May, 2016 spot Warner Bros. staked out back in 2013. WB's decision to move BvS:DOJ to March 25, 2016 looks smarter than ever, since there's no way on earth that film can beat even half an Avengers. But if it saves Warner Bros. from the humiliation of being curb-stomped by Disney and Marvel, it also means that the year will almost certainly belong to Marvel, no matter how well the Dawn of Justice performs.