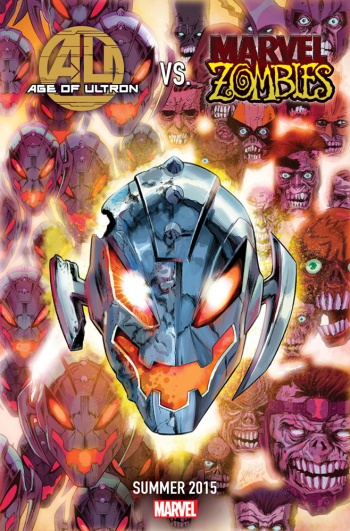 Marvel's string of announcements continues with another issue #1 hitting next summer.

Continuing its trend of extremely vague teasers, Marvel has announced another new series for summer 2015: Age of Ultron vs. Marvel Zombies. Just like yesterday's Civil War announcement, we've got nothing but a release window and an image to go on. This comes right on the heels of Marvel's announcement that Robert Downey Jr. has signed on for Captain America 3, which may tie in to the Civil War storyline--though we still don't know if it's a reboot of the 2006-2007 Civil War or something else altogether.

If Age of Ultron sounds familiar, it's because it was the title of a 2013 comics storyline; oh, and it's also the title of the sequel to 2012's The Avengers film. Marvel Zombies was a limited run back in late 2005 to early 2006 featuring, naturally, zombie versions of Marvel's notable superheroes written by The Walking Dead creator Robert Kirkman. Like Age of Ultron vs. Marvel Zombies and Civil War, Avengers: Age of Ultron premieres in mid-2015, strongly suggesting these new comic storylines will tie into the films. So what, exactly, is Marvel planning by mashing up these two entities? We'll find out next summer.