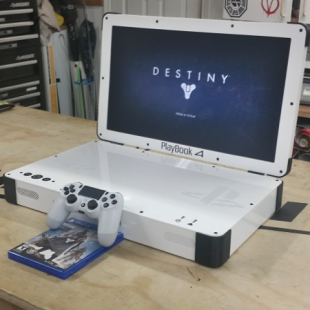 Ed Zarick has unveiled the "PlayBook 4," a custom-made PS4 laptop that follows in the footsteps of his Xbook One.

You may recall back in September when hobbyist engineer Ed Zarick unveiled the Xbook One. A customized version of the Xbox One, it transformed the fancy new console into an even fancier laptop complete with a custom chassis and a built-in LED screen. Now, after a swath of requests from gamers sitting on the opposite end of the console wars, Zarick has returned with a new laptop redesign of the PlayStation 4.

Dubbed the PlayBook 4, Zarick's latest creation takes the innards of a PS4, and stuffs them into a custom, 3D printed and laser cut chassis. This is then coupled with a 22" Vizio 1080p LED LCD TV screen; the same kind he used in the construction of the Xbook One. The TV wouldn't be the only repeat component he used in the creation of the PlayBook. "What I did when I built the XBOOK ONE was design it in a way that I could make a PS4 [version] in the future," he said, speaking to The Escapist. "[I] just had no plans to do it this quickly." It only took "about 8 hours" of work, in turn, to modify the design and adjust the mounting locations so that they better fit the PS4.

The ease of the design process shouldn't, in any way, suggest that the PlayBook 4 is less impressive than the Xbook One. In addition to its custom casing and built-in screen, it maintains the WiFi capability of the PS4. An HDMI-out port can also be included if customers are interested in paying a bit extra for the ability to switch over to a larger television.

The only real downer is that fact that these (understandably) don't come cheap. Even if you provide your own PS4, a PlayBook 4 is going to cost you $1,095 before shipping. Without a pre-purchased PS4, you're looking at a solid $1,400 investment. It's also worth noting that, while the design of the PlayBook 4 is obviously more friendly to gamers on the go, the PlayBook 4 doesn't have a internal battery and will need to be plugged in to play. Regardless, as someone who loves his PS4, I can personally say that I'd love to get my hands on one of these. Take a look at them and let us know what you think.