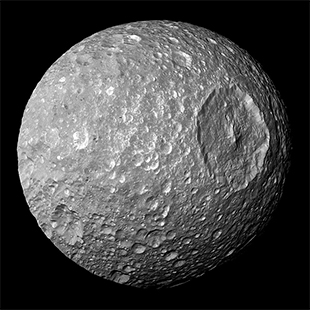 Saturn's moon Mimas either has an underground ocean or an oddly-shaped core, according to researchers.

"We thought it was the most boring satellite," Radwan Tajeddine, a planetary scientist at Cornell University, said of Mimas. But when it was noted that the moon was wobbling more than expected, it was realized that there's more to Mimas than meets the eye.

"Something else has to be going on inside," says Tajeddine, who published a study with his colleagues online today in the journal Science.

While some scientists disagree with the findings reported in the paper, Tajeddine's team believes this wobble points to one of two possible explanations: either an ocean is buried beneath Mimas' icy crust, or its core is misshapen. Based on NASA images of Mimas, the team reconstructed the moon in 3D imaging and developed models to try to explain the wobble.

The first model that worked gave Mimas a rocky core shaped like a rugby ball. Tajeddine theorized that perhaps the core formed first, closer to Saturn, and was deformed into the oval shape by the planet's strong gravity. After it drifted further away, ice settled onto the moon, giving it its current round shape. However, if this were the case, the team expects some retention of the rugby ball shape to be seen poking out of the round surface, but this is not observed.

The second model gave Mimas an ocean under its surface, and the sloshing around of the liquid is what would cause the wobble. However, Mimas' surface - which is very old, and very cratered - shows no signs of ever having had water on its surface.

Planetary scientist William McKinnon finds this second model "implausible." It would only take a few million years (not long in astronomical times) for that underground ocean to freeze over due to orbital dynamics, meaning our observation of this unstable state would be quite coincidental. He suggests the wobble can simply be explained by a comet striking Mimas.

Mimas, also called Saturn I, is most famous for resembling the Death Star when viewed from certain angles. The moon's Herschel crater looks like the Death Star's superlaser, but Mimas was discovered almost three years after the release of A New Hope, so the similarities are entirely coincidental. Unless George Lucas is a prophet - and he is not; rest assured.