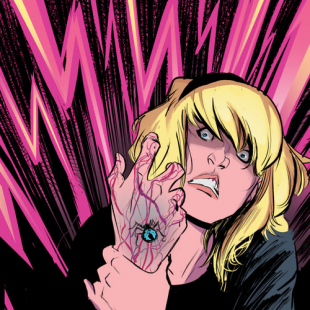 Marvel has announced a new alternate reality series following the adventures of a Spider-powered Gwen Stacy.

Gwen Stacy is easily one of the most famous characters in the long and complicated story of Spider-Man. As important as she is however, her role has still always been that of a side character. She was Spider-Man's girlfriend. Then she was Spider-Man's dead girlfriend. I probably don't need to explain how limiting it has to be when your sole purpose in a story is to make your boyfriend sad.

Perhaps hoping to give Ms. Stacy a chance to stretch her legs a little, Marvel has announced that it will be launching a new alternate universe book in February 2015 where it was Gwen bitten by the radioactive arachnid that spawned Spider-Man rather than Peter Parker. The new book will be dubbed Spider-Gwen and feature writing from Joe Latour and art from Robbi Rodriguez. Rico Renzi will be serving as the series' colorist.

This, of course, won't be the first appearance of this spider-powered version of Gwen. Her Spider-Woman persona first appeared in issue 2 of the ongoing Edge of the Spider-Verse series Marvel has been publishing in the lead up to the Spider-Verse event Marvel will be debuting next month. The company decided to invest in Spider-Gwen after the fan response to the re-imagined heroine exceeded all expectations.

"It's a rare character that gets the public outcry that Spider-Gwen got," said Marvel senior editor Nick Lowe. "From the sell-out of Gwen's first appearance to the groundswell on Twitter we're excited to bring more Spider-Gwen into the world with the creators who started it all!"

While we'll, of course, have to wait and see if Spider-Gwen winds up being any good, this news has me pretty stoked on several levels. For one, I'm always happy to see bigger publishers like Marvel and DC invest in new female heroes. Beyond that though, some of the things Marvel's promising sound really cool. Latour, for instance, has already announced plans to twist Daredevil, a long-time ally of Spider-Man into one of Gwen's villains. The push and pull between Gwen and her father, an officer of the NYPD, should also provide some nice fodder for conflict. What do you guys think? Will you be picking up Spider-Gwen next February? Or is this one web you plan on escaping?