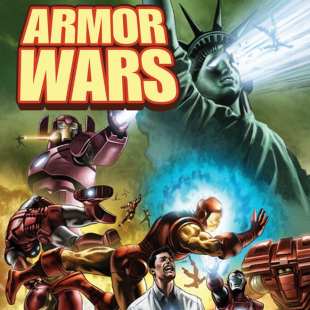 Marvel seems to be on a bit of a nostalgia kick lately. In addition to announcing a revisit of its classic Secret Wars for 2015, the publisher has recently indicated that it will likewise be investing in new Civil Wars, Age of Ultron vs. Zombies and Planet Hulk story lines. It's recently been revealed however, that even those won't be the end of the Marvel's retro retread.

Adding to the growing glut of revisited titles, Marvel has now released a teaser image for a new Armor Wars event. The original Armor Wars, written by David Michelinie and Boy Layton, was released in 1987 and followed Tony Stark's quest to destroy and contain weapons based on his stolen designs. It's unclear at this time exactly how much the new book will draw from the original story. That said, the company's teaser image does strongly hint at a few things. The classic Hulk Buster armor, for instance, is prominently featured in the image. The teaser also showcases a set of Galactus Buster armor that we're definitely hoping to see in a center stage position at some point during the story's proceedings.

While Marvel has us to speculate about the plot of the new Armor Wars, it was kind enough to provide us with one solid, confirmed detail. Armor Wars will be releasing in Summer 2015. We reached out to the company to see if we could learn anything more, but their only response was to "stay tuned." Here's hoping it won't keep Iron Man fans in the dark for too long.