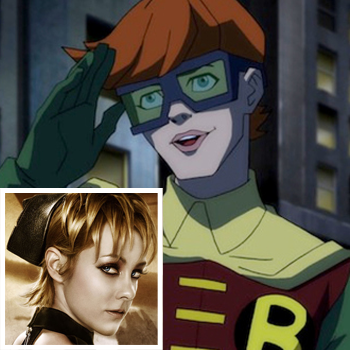 A reported $5 million fine said to be Warner Bros' preferred punishment for anyone who leaks information about Batman v Superman: Dawn of Justice was apparently not enough to deter an anonymous extra from handing Detroit's WILX-10 News a juicy rumor: Carrie Kelly may be coming to the DC Comics Movieverse.

Though not part of "official" mainstream DC Universe continuity, Kelly was the first Robin depicted as female in comics. Jenna Malone, who worked with director Zack Snyder in Sucker Punch, is the actress believed to be playing the part. Warner Bros has declined to comment.

Created by Frank Miller in his seminal 1980s alternate-future story The Dark Knight Returns, Carrie Kelly is a clever teenaged girl who abandons her neglectful parents to seek a father figure in the recently-unretired Bruce Wayne. She trains to be the new Robin, and becomes instrumental in Batman's renewed conflicts with both The Joker and Superman. Dawn of Justice has been heavily-rumored to be borrowing major elements of story and design from the story, which was credited with renewing the popularity of the Batman franchise in the 80s.