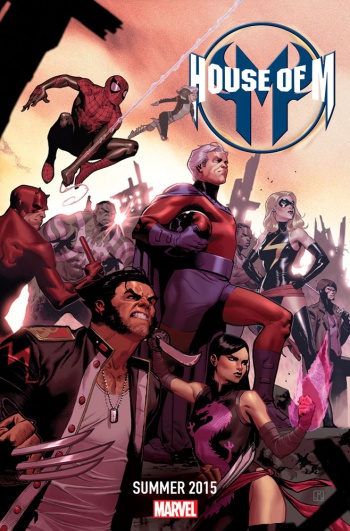 Prepare to revisit Scarlet Witch's alternate reality, as the 2005 limited comic series House of M is getting resurrected next summer.

Stop me if you've heard this one before: Marvel has announced a new series with a familiar title will be hitting comic shops in the summer of 2015. This time it's House of M #1, which references a 2005 limited-run series of the same name. Set after the events of Planet X and Avengers Disassembled, House of M mostly took place in an alternate reality as a result of Scarlet Witch's reality-bending powers get way out of control. This false world affects many of Marvel's storied superheroes, with some of them taking on new lives with no memory of what came before.

House of M was an eight-issue crossover series that ran from June to November 2005, with the events of the alternate reality crossing over into real-world repercussions. Penned by Brian Michael Bendis, the run eventually saw many of X-Men's mutants losing their powers. There were later several other House of M tie-ins, including during Marvel's Civil War.

This is the fourth announcement Marvel has made in the last week that implies the publisher is revisiting older events; first it was Civil War, then the two-series mash-up Age of Ultron vs. Marvel Zombies, followed by Armor Wars, all of which are coming next year. Also coming next year: a little movie called Avengers: Age of Ultron. How will it all tie together in the MCU? We have no idea, so leave your best conspiracy theories in the comments.