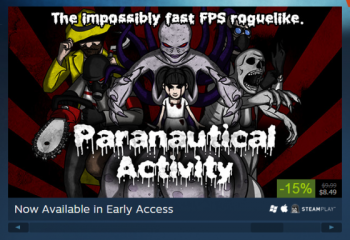 In an unsurprising lesson of cause and effect, Paranautical Activity was pulled from Steam following a Gabe Newell death threat.

Here's a free life tip that should seem obvious: don't threaten to kill the man who controls the only platform your game is available on. Paranautical Activity developer Mike Maulbeck learned this the hard way, after a death threat to Gabe Newell led to his game being pulled from Steam.

Maulbeck, furious at Steam for not updating its banner ad for Paranautical Activity to reflect that it had left early-access and was now in full release, vented over Twitter that Steam is "the most incompetent piece of f**king shit", and claiming that the service is "f**king taking money out of my pocket" and "misinforming people that my game is in f**king early access".

He then posted Tweet threatening Newell's life, which read, "I am going to kill Gabe Newell. He is going to die." It has since been deleted, but as always, the internet never forgets, and this time our friends over at Player Attack managed to save a screencap of the Tweet. It certainly didn't help that Maulbeck was using the Halloween-themed handled Mike Murderbeck at the time...

Upon calming down, and realizing the severity of his snafu, Maulbeck posted, "Welp. PA no longer on steam. I'm done making videogames now. It sucked while it lasted," later adding "I'm jumping back and forth between killing myself and getting a job at radio shack."

He did take one last pass at Steam on his way out, though, stating "I hope by the time my next game comes out steam doesn't have this awful fucking monopoly anymore."

Lesson learned: don't bite the hand that feeds you.