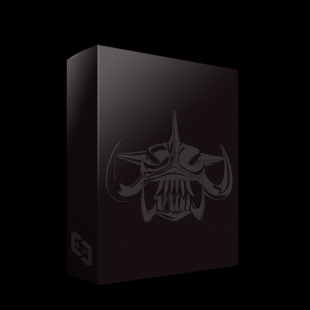 IndieBox and Double Fine have teamed up to release a special fifth anniversary limited edition of Brutal Legend.

Some games should be awesome just based on their concept alone. Brutal Legend was one such title. Following the adventures of "the world's best roadie," it transported players to a fantasy land inspired by the imagery and themes of heavy metal music. Sadly, the game met with some mixed reviews thanks to its not always perfect coupling of action and real-time strategy gameplay. Nonetheless, it developed a solid core of fans who loved its setting and appreciated the hard work that Tim Schafer and Double Fine Productions put into making it feel authentic to its source material. Those fans, in turn, might want to be interested to learn that the game is getting a new limited edition release courtesy of the fine folks at IndieBox.

The limited edition will represent several firsts for IndieBox. For one, it will represent the first time the company has revealed a game prior to shipping it to its subscribers. Likewise, this will also be the first game it's worked with that's already received attention from a major publisher. Despite this, IndieBox president James Morgan feels that Brutal Legend is a perfect candidate for the physical box treatment that's the company's specialty.

"We aim to release PC games that are an experience to open, and give another layer of engagement beyond the digital download," he said, speaking to The Escapist. "There was also never a physical box of the Mac and Linux [Brutal Legend] ports, and we are very excited to be able to provide that for gamers."

Morgan went on to confirm that IndieBox has no plans "to re-release a game that has ever had a physical version." He clarified that this doesn't "mean we are not open to it" but that it has no current plans to do so. He likewise affirmed that the company's willingness to work with Double Fine stemmed somewhat from the "massive support" the studio has offered to the indie gaming community.

Sadly, IndieBox declined to share many details about what special goodies its Brutal Legend re-release will contain. Breaking from the company's usual standard of putting the game on a unique USB cartridge, IndieBox did confirm that it will be shipping Brutal Legend on a DVD due to its size. Outside of that, if previous products from the company are any indicator we can at least expect some stickers, posters and other nifty pieces of swag. Gamers interested in snagging a Brutal Legend indie box of their own have until October 22nd to subscribe to the monthly service. A limited run of individual copies will also be sold at its official website.