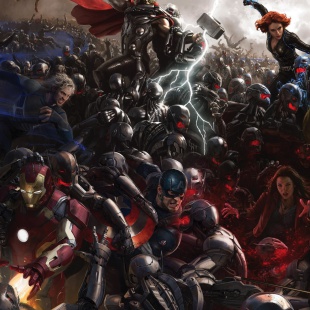 I'm guessing that you know by now that the first trailer for Avengers: Age Of Ultron leaked online just over an hour ago. You might be wondering where it is? It's everywhere, literally everywhere. As you can see, we haven't embedded the video, and out of respect for Disney and their extremely effective cease and desist lawyer armies, we're not going to. But if you know how to use Google, you can easily find it. No really, you can. The genie is out of the bottle and even the eye of Sauron Walt can't stuff it back in.

UPDATE: Well, Disney knows it can't put the genie back, so they've gone ahead and made the release official. We've edited this post accordingly. Meanwhile, here's the trailer, now without the fear of Disney's legal powers:

Ok, let's talk for a second.

1) Those of you who were, like me, in Hall H last summer during San Diego Comic Con will recognize almost everything in it. The Avengers seemingly defeated, scenes of rampant chaos and destruction on what looks like a global scale, Tony Stark in his Hulkbuster armor(!!!!) facing off against The Hulk, and lots of what amounts to Ultron gloating while Tony Stark laments some serious mistakes. There's only a tiny glimpse of the dinner party scene also shown, just bits from the end when Ultron crashes the party. Basically, it's enough to know that shit is going to get very, very real in the second Avengers outing.

2) They've tweaked James Spader's Ultron voice since I saw these scenes last summer. He's still very robotic, but he has an almost raspy tone of voice. Whatever else Ultron may be, he's going to feel like a fully fleshed out villain with a surprising amount of humanity, one I really think will be up there with Loki, except with a much more coherent reason for him to be the film's antagonist. We'll see.

3) Incidentally, even from the small glimpse this trailer gives, it's obvious that the film could easily set up the kind of universe-shifting stuff at the heart of the crazy ass rumors surrounding the Marvel Cinematic Universe.

4) If I were involved in any substantial way with Marvel's Agents of S.H.I.E.L.D., I'd be screaming bloody murder to every single one of my bosses. Even though it's vastly improved in every measurable way from last season, the show has not experienced a ratings jump comparable to that improvement, and it's likely it might not make it to a third season. But, as was announced last night, this trailer was supposed to debut for the first time sometime during next week's episode. That kind of promotion has the potential to deliver a serious shot in the arm, ratings-wise, since a lot of people who might have written AOS off would tune in just for the trailer. No doubt then the show's writing and production staff had what they believed to be a really strong episode paired with the trailer in hopes of retaining new viewers in the following weeks.

But that's pretty much dashed now. Yeah, some people will still turn in, but while a debut next week meant that everyone would be talking about the trailer (and Agents of SHIELD) come Tuesday, the early leak and now official release means that conversation is happening now. It'll be old news in a week. Yes, they'll still advertise it next week as the official television premier, but that's weak tea after a week. This doesn't doom the show of course, but leaking it was a serious dick move.

Anyway, here's my point: someone just really fucked over MAOS today with this leak. And given how secretive Disney is with stuff like this, there is almost no way this leak didn't come from within the company. Now who, and why? I leave that to people smarter than me to speculate, but there's probably a lot of yelling right now in Burbank.

5) Finally, Marvel, for its part, had the perfect response:

So, those of you who've seen it, let's talk about it in comments!