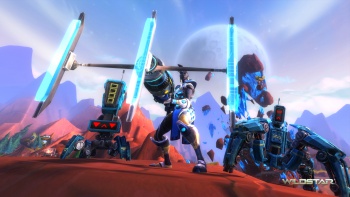 NCSoft stated its staff reductions affect all of the company's western branches except for AreaNet, developer of Guild Wars. Polygon reports an anonymous source said layoffs especially affected Carbine Studios. The studio has reportedly lost 60 employees "across all levels," rather than only entry-level staff.

Community manager Tony Rey also stated on Wildstar forums that staff reductions had impacted "several colleagues." Last night, Chad Moore, creative director at Carbine Studios, also briefly spoke of the layoffs in a tweet expressing he would miss his teammates who were affected.

NCSoft's official statement is as follows:

Today we announced a restructuring of key operations within NC West. As a result of this restructuring, we are implementing staff reductions across our Western operations with the exclusion of ArenaNet. While decisions like this are always hard, they are necessary as we begin the implementation of a new strategy designed to strengthen our footing as a leader in global entertainment.

Moving forward, we will continue to focus on our core development capabilities and the intellectual properties (WildStar, Aion, Lineage, and Guild Wars franchises) that have made NCSOFT what it is today. However, we are looking to move into new business segments like mobile and tablet games as well as explore emerging technologies.

Again, the decision to reduce staff was not an easy one, and we sincerely wish everyone well in their next endeavors.

Gamespot reports Carbine Studios had 100 employees before the 60 who were laid off, and the company's LinkedIn page places the company's size in the 51-200 people range.