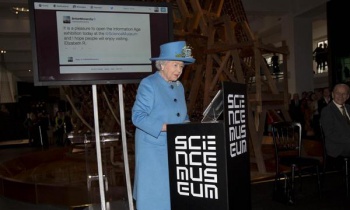 The Queen finally joins the social media age by kicking off Britain's Information Age gallery with her very first Tweet.

Twitter is a pretty powerful tool these days. When used responsibly, it can quickly convey vital information to millions of people at once, and when used irresponsibly, well, it can completely destroy someone's career. Now, it looks like Great Britain's Queen Elizabeth II is finally getting in on the action, sending her very first Tweet ever at the opening of the Information Age gallery at London's Science Museum.

Check out the first message the Queen chose to send to her subjects via Twitter bellow:

It is a pleasure to open the Information Age exhibition today at the @ScienceMuseum and I hope people will enjoy visiting. Elizabeth R.— BritishMonarchy (@BritishMonarchy) October 24, 2014

The 88-year-old Queen Elizabeth is no stranger to embracing new technologies. In 1953, at her own request, she became the first British monarch to have her coronation broadcast live on television.

The Information Age gallery that she opened with her Tweet is a special exhibit focused on the evolution of modern communications.