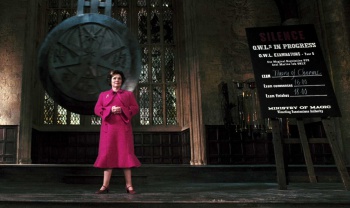 Harry Potter's story might be over, but fans haven't stopped clamoring for more tales from J.K. Rowling's magical wizarding world. Luckily, Rowling is more than willing to deliver. As a Halloween treat for fans on Pottermore, the Harry Potter scribe is delivering a new short story about one of the series' most reviled characters: former Hogwarts professor Delores Umbridge.

The 1,700-word story will unveil Umbridge's backstory, which may explain how she came to be the witch Harry Potter fans know and despise. Umbridge first appeared in Harry Potter and the Order of the Phoenix as the new Defense Against the Dark Arts teacher, quickly establishing herself as one of the worst professors in Hogwarts history by inflicting cruel punishments and instating absurd rules. Later, Umbridge was appointed Senior Undersecretary to the Minister of Magic and led the charge against Muggle-borns, despite not being a Death Eater herself.

This isn't the first time Pottermore has been used to expand the harry Potter universe; Rowling has published an ongoing series about events of that world, including one that featured the grown-up boy who lived himself. Unlike the next film about the wizarding world, fans don't have to wait until next year: Rowling's short story will be published on Pottermore on October 31. That gives you just under a week to sign up and get sorted; fingers crossed you're not in Hufflepuff.

Related to:
sarah leboeuf, harry potter, harry potter and the order of the phoenix, jk rowling, movies and tv
0
Tweet