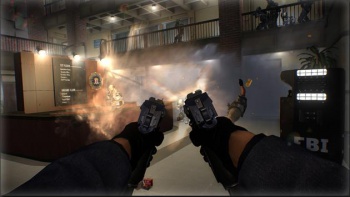 To promote John Wick, Payday 2 will be getting the titular hitman as a free DLC character.

John Wick is a movie about Hitman making hits, that just came out, and stars the perpetually confused Keanu Reeves. If you saw the movie and thought "this is pretty great, but I wish I could actually be John Wick," then Payday 2 devs Overkill Software can give you the next best thing. In a cross-promotional deal with the movie, Keanu Reeves' John Wick is now a free DLC character for Payday 2

"We continue working with great partners, this time with Lionsgate and their movie John Wick," Starbreeze Chief Executive Officer Bo Andersson Klint said. "We've finally got a real hitman on our team. Being able to play as John Wick in Payday 2 ahead of the movie's release is a great reward for our loyal Payday 2 community, which reached the final milestone of 1.5 million members in our Payday 2 Steam group before our 12-day Crimefest event."

The free DLC is available to all Payday 2 players, and as well as the playable John Wick character, includes a Hitman perk deck that gives you the ability to dual wield weapons, a new Chimano Compact pistol, dozens of modifications for said pistol, a new knife, and three new sunglasses, one just for Wick and two that all characters can use.

Additionally, if you're planning on seeing John Wick and don't yet own Payday 2, purchasing your tickets for the movie via Fandango will net you a free Steam download code for the game.