If you're a big EarthBound fan, you'll definitely want to check this one out.

Update: You Are Now EarthBound has raised the $100,000 needed to produce its collectibles! For those of you wondering about cease and desists swooping in to stop this thing, the creators have stated that they have all the proper permissions and licenses from the EarthBound copyright holders.

Original Story: EarthBound is probably right at the top of my list of obscure-JRPGs-that-actually-have-massive-fanbases, so it's no surprise that a Kickstarter to create some exclusive EarthBound collectibles has already almost reached its funding goal. You Are Now EarthBound is is project from Fangamer that aims to create a "media box set" of EarthBound goodies, including an EarthBound handbook, and a documentary about American EarthBound fans.

The handbook in particular is probably the most interesting piece in the bundle. The creators describe it as "an obsessively-designed guide which is a companion to the game, rather than a collection of to-do lists and maps. Our goal is to flesh out the world of EarthBound by collecting and shedding light on the tiny details, tricks, and ideas that fans have spent the last 20 years developing."

Check it out below: 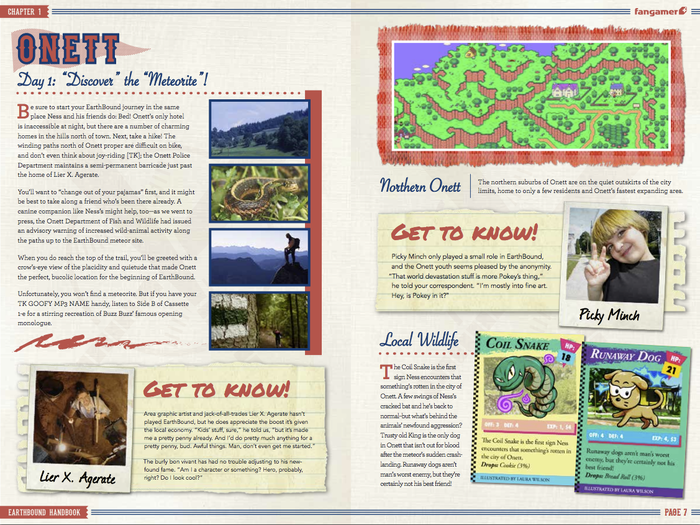 Other goodies include an album of officially licensed EarthBound music by the band, THE BAD DUDES, and a fan-Zine filled with fan-made art and stories. Backers who pledge $32 will get digital versions of the media box set, but those who go as high as $64 will get physical real-world versions. Fans who shell out $256 for the "You Are Now EarthBound" tier will also receive a backpack full of random goodies, such as a USB Ness-bot.

Have a look at some concepts of these items below:

Best of all, if you'd rather wait to see if this one makes it off the ground, Fangamer has stated that all of the items (minus the backpack and the custom collector's box) will be made available on its online store after the Kickstarter ends.