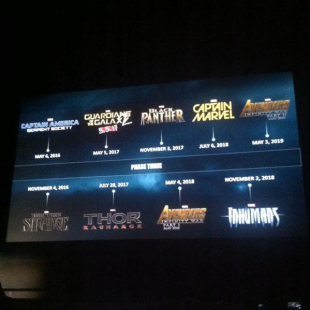 Editor's note: Post has been updated and expanded since initial publication

During a "secret" event for fans and press today in Los Angeles at Disney's El Capitan theater, Marvel Studios melted fans' brains when it revealed titles and release dates for all nine Marvel Phase 3 films.

Following Avengers 2, the studio will be releasing:

The presentation began with a deliberate and hilarious bit of misdirection, as it was first announced that Captain America 3 would be subtitled "Serpent Society." Obviously, that would have contradicted all recent rumors suggesting a battle between Tony Stark and Steve Rogers influenced by Marvel's Civil War crossover event. However, midway through the presentation, Marvel corrected itself, revealing "Civil War" as Robert Downey, Jr. and Chris Evans were brought out on stage for the announcement.

Meanwhile, 42 actor Chadwick Boseman was announced as the lead in Black Panther, introduced to fans formally by Robert Downey, Jr. and Chris Evans during a skit in which Downey, Jr. and Evans pretended to fight, then demanded Boseman pick sides. Cue wild speculation on how Black Panther will* officially debut in the MCU during Cap 3. It's worth noting, by the way, that in the comics, Black Panther is from the fictional African nation of Wakanda, notable among other things for being the source of the Vibranium used to make Captain America's shield.

It was also confirmed that Captain Marvel will be the Carol Danvers version of the character. No actress has been announced, however Marvel's Kevin Feige hinted at big plans, describing her during the reveal as the "most powerful hero" in the Marvel Cinematic Universe. While this may irk fans who hoped for Kamala Khan, AKA Ms. Marvel, it's worth noting that in the comics, Ms. Marvel was recently confirmed to be an Inhuman. With the Inhumans film now official, Marvel still has a means of bringing the popular character into the MCU.

Not confirmed during today's event: yesterday's reports that Sherlock star Benedict Cumberbatch would be playing Doctor Strange. Also left out: any comment on the fate of Spider-Man. Recent rumors held that Sony and Marvel are in the midst of discussions to allow Spider-Man to be part of the Marvel Cinematic Universe in some way. Reports today from trade publications insist that's because deals havn't been finalized. However, negotiations are real and ongoing. Our guess: expect a Benedict Cumberbatch announcement soon, but expect to wait a much longer time for anything Spider-related.

Further information was revealed during a Q&A with Kevin Feige held after the event. He confirmed that Marvel had intended to reveal most of this last summer at San Diego Comic Con, but couldn't bring everything together in time. (Which, by the way, explains the otherwise lackluster Hall H panel.) He also confirmed yet again that while Black Widow is "important" in future films, there are no plans for a solo movie just yet.

UPDATE: Badass Digest is reporting that Feige has pretty much confirmed that Andy Serkis is playing Klaw in Avengers: Age of Ultron. Klaw, of course, is a notable enemy of Black Panther. Read into that what you will...

As nearly everyone has noted, Marvel's event this morning comes in stark contrast to DC's superhero film slate reveal two weeks ago. That reveal happened unceremoniously as part of Warner Bros. quarterly investor presentation. If you're entertained by Hollywood pissing matches (and I am), you'll note that DC's failure to make the most of having announced a Wonder Woman film, not to mention having squandered the opportunity to make all its announcements an event, allowed Marvel to eat its lunch yet again.

* Feige has now confirmed today that Black Panther will first show up in Cap 3 in a sizable role.