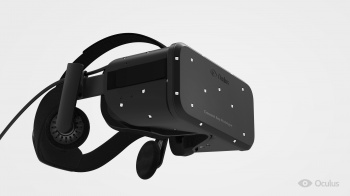 Facebook CEO Mark Zuckerburg believes virtual reality is a part of the future, but it may take many years to become important.

Facebook is investing aggressively in the future with Oculus, which Facebook CEO Mark Zuckerburg stated won't reach a meaningful status as a platform until it's sold 50-100 million units, he said in a Q3 2014 earnings call.

Zuckerburg is optimistic that his investment in Oculus, which announced in March it had been acquired by Facebook, will be successful.

"As I've said before, with Oculus we're making a long-term bet on the future of computing," Zuckerburg said in the earnings call. "Every 10-15 years a new major computing platform arrives, and we think virtual and augmented reality are important parts of this upcoming next platform."

However, Zuckerburg said the company's efforts for Oculus may not reach its full impact for several years. Facebook is approaching a strategy for Oculus for over the next 3, 5, and 10 years, and Oculus needs to sell 50-100 million units until it's a meaningful platform.

Zuckerburg is still confident Oculus is performing well in its early days. He stated the company has shipped 100,000 Oculus Rift developer kits across 130 countries. In September, Oculus released more details about the consumer version of the Oculus Rift, and Oculus co-founders are hoping to stay within the $200-$400 price range for the consumer version.

"It's still early days for Oculus, but we're encouraged to see the variety of apps and games being developed for the platform," Zuckerburg said. "Our efforts here will take longer to achieve their full impact, but we're going to continue preparing for the future by investing aggressively."