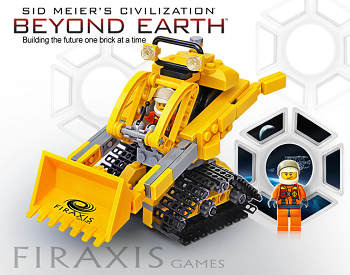 Andrew Clark, a senior artist at Firaxis, has launched a LEGO Ideas campaign for his Mech Worker build from Civilization: Beyond Earth.

Civilization: Beyond Earth is out, and while the game has been met with some markedly mixed reviews, there are still many fans who enjoy it and the experience it delivers. That being the case, we could definitely picture some gamers getting excited over a recently launched LEGO Ideas campaign aimed at turning the game's Worker Mech into a bona fide LEGO product.

The campaign was launched by Firaxis senior artist Andrew Clark, who originally created the 187-piece LEGO build as "a release day gift for every employee of Firaxis." This entailed creating a virtual model using LEGO's free Digital Designer program, building a real-world prototype and then ordering more than 33,000 LEGO parts that were then divided into 180 custom sets. Clark was assisted in his efforts by the company's directors, all of whom "managed to keep it secret" until Beyond Earth's launch on October 24th.

Considering all the hard work that went into creating his Mech Worker, it's no wonder that Clark would like to see it become an official set. And while there's obviously no telling for sure yet, we're willing to bet that Clark's Beyond Earth build might have what it takes to garner the 10,000 supporters it need to be put up for official review by the LEGO Company. After a mere four days it's already nearing 1,000 supporters, leaving it plenty of time (361 more days at the time of this article's publication) to obtain the remaining 9,000. Moreover, this wouldn't be the first time that one of Clark's campaigns has been a success. One of his Dr. Who builds is already up for review. He's also campaigning for another set based on the ITER fusion reactor. To check out Clark's Beyond Earth campaign for yourself (and maybe even lend your support), feel free to head over to its Ideas page.