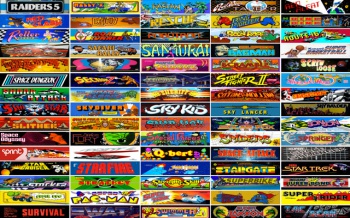 Old-school classics like Bionic Commando, Indiana Jones and the Temple of Doom, and hundreds more are playable right now thanks to the emulation efforts of Jason Scott and JavaScript Mess.

Ever get the hankering to play a decades-old arcade game? Or, more likely, are you a fan of ready-to-play internet time-wasters? The Internet Arcade might be what you're looking for. Using JavaScript Mess (or JSMESS), curator Jason Scott has compiled over 900 arcade games, including classics like Burger Time, Commando, and Tron.

"The Internet Arcade is a web-based library of arcade (coin-operated) video games from the 1970s through to the 1990s, emulated in JSMAME, part of the JSMESS software package," according to its website. "Containing hundreds of games ranging through many different genres and styles, the Arcade provides research, comparison, and entertainment in the realm of the Video Game Arcade." So why go through all the trouble of making hundreds of old games playable in web browsers? According to Scott, "I decided to futz around with our build environment (which, it must be absolutely stressed, the other JSMESS team members built, not me), just to ask the question, 'And how hard would it be to build arcade games, anyway?'" In other words: why not?

If you're wondering how to actually play these games, which were most definitely not designed with modern computers in mind, Polygon reports: "They follow the standard MAME convention where 5 on your keyboard deposits the credit and 1 begins a 1-player game, with the arrow keys moving in those directions and the keys to the left or right of the space bar serving as action buttons." Of course, there's no guaranteeing how any of these games will work on your current computer set-up, but for fans of arcade classics, it's certainly worth a try--or several hundred tries.

Source: The Internet Arcade via Polygon