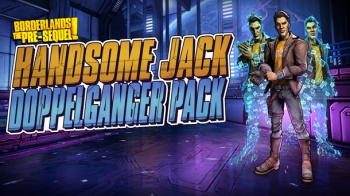 Update: We've now got some screenshots and information on all three of Jack's skilltrees.

Original Story: Well... not quite Handsome Jack, per-se, but the first Borderlands: The Pre-Sequel DLC character pack is entitled the "Handsome Jack Doppelganger Pack" and allows you to play as a clone of Borderlands 2's main villain. Gearbox Software top dog Randy Pitchford revealed the DLC at a special Borderlands panel at this year's PAX Aus, and offered us a little bit of a glimpse into how Jack will play.

Jack's action skill spawns two Digi-Jack clones, who will fight by your side and can be upgraded through his three skill trees. Jack can also shoot enemies with wrist lasers, get buffs every time he picks up money (in typical CEO fashion), or even get upgrades for using guns made by specific manufacturers.

But perhaps the most hilariously useless talent in Jack's arsenal is "Inspire" - an ability that allows him to occasionally spout inspirational quotes (the likes of which anyone who played through Borderlands 2 will be familiar with). The Inspire talent does, as you would expect, absolutely nothing - no combat bonuses, no healing, no damage. Nada.

The pack will be available on November 11 for Xbox 360, PlayStation 3, and PC. It will set you back $9.99 as an individual purchase, or $29.99 bundled with three other upcoming pieces of DLC in the Borderlands: The Pre-Sequel Season Pass.

Disclosure(s): Strauss Zelnick, Chief Executive Officer and Chairman of the Board of Directors of Take-Two Interactive Software, Inc., is the head of ZelnickMedia, an investor in both Take-Two and Defy Media, LLC, our parent company. This article was published without approval or consent of ZelnickMedia or Take-Two.