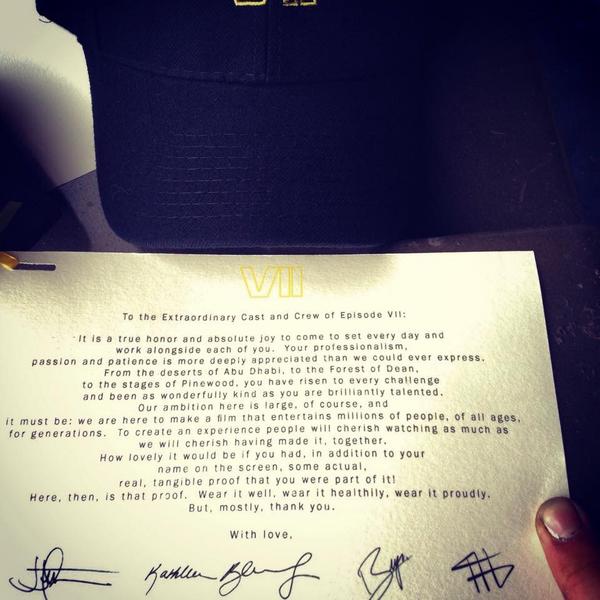 Star Wars: Episode VII has advanced one big step further down its path toward the big screen.

Back when Star Wars: Episode VII first received its release date, there were some who understandably worried that the film's tight timeframe wouldn't give it enough time to be the fantastic feature it arguably has to be. After all, the film didn't start shooting until April 2014, leaving it little leeway to finish for its December 2015 release date if anything went wrong. That being the case, it's recently been revealed that Episode VII has officially wrapped up its principal photography.

This news comes via way of Twitter where crew member James Rose posted an image of a hat and note given to the film's cast and crew as the film came to its close. The note stated the following:

To the Extraordinary Cast and Crew of Episode VII:

It is a true honor and absolute joy to come to set every day and work alongside each of you. Your professionalism, passion and patience is more deeply appreciated than we could ever express. From the deserts of Abu Dhabi, to the Forest of Dean, to the stages of Pinewood, you have risen to every challenge and been as wonderfully kind as you are brilliantly talented. Our ambition here is large, of course, and it must be: we are here to make a film that entertains millions of people, of all ages, for generations. To create an experience people will cherish watching as much as we will cherish having made it, together. How lovely it would be if you had, in addition to your name on the screen, some actual real tangible proof that you were part of it! Here, then, is that proof. Wear it well, wear it healthily, wear it proudly. But, mostly, thank you.

The film's cast and crew were also spotted (and photographed; thanks ComingSoon!) at a party over the weekend celebrating the end of shooting. Among the attendees were expected faces like Mark Hammil, Carrie Fisher and Harrison Ford. Other notables included cast members John Boyega and Daisy Ridley as well as Avengers 2 actor Andy Serkis and nerd favorite Simon Pegg. Pegg's presence was perhaps especially noteworthy as it has been rumored that he will have a cameo of some sort in the film.

None of these celebrations, of course, mean that the film is near being finished. Even with the principal photography there's still likely to be a metric ton of post-production work to finish as well as potential re-shoots and additional scenes. That said, this is still a significant step forward for Episode VII and Disney's efforts to revive Star Wars in the movie-space once again.