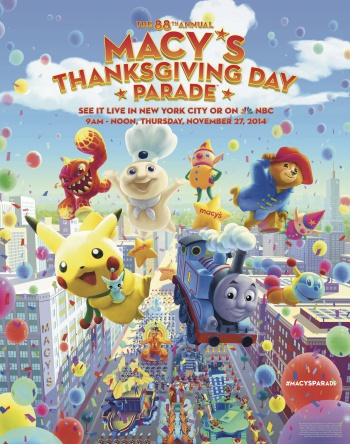 The electric mouse Pokemon will be sporting a new holiday look when he floats through New York City alongside Thomas the Tank Engine and the Pillsbury Doughboy.

Like it or not, November is here, which means we're barreling towards the holidays at an alarming rate. First up is Thanksgiving, which comes with its own traditions: yelling at football, eating turkey until you pass out, and watching a parade of character-shaped balloons float over New York City during Macy's annual Thanksgiving Day parade. Pikachu, one of the most geek-centric displays in the spectacle, is about to float for the 15th year, but this year, he'll be sporting a festive new look and carrying a Pikachu snowman.

But wait, Pikachu isn't the only gaming character taking up space on the promotional poster for the yearly parade--right behind him is Eruptor of Skylanders fame. They're just two characters in a long legacy of the Thanksgiving Day Parade's nerdy line-up; other famously geeky floats include Spider-Man and Sonic the Hedgehog, the latter of which was the first video game character in the parade's history when he debuted in 1993.

Macy's Thanksgiving Day Parade airs live on Thursday, November 27. And if that's too long a wait, Pokemon Omega Ruby and Alpha Sapphire will be out on November 21.