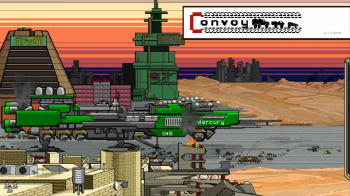 Convoy is like FTL, Car Wars, and Mad Max had a glorious roguelike love child.

Every now and then you find a game that's so in your wheelhouse, pun intended, that you can't help but share it. Convoy is self-described as a tactical roguelike-like inspired by Mad Max and FTL. Though I personally see a lot of Car Wars DNA in there as well, but not too many people remember semi-obscure Steve Jackson games published in the 80s. So I can see why that might not make the byline. There's just something oddly and undeniably fun about attaching weapons to cars, see more action oriented games like Interstate '76 or Twisted Metal. Initially, Convoy looks very promising in its ability to channel its inspirations and the strives it's making to set itself apart.

Similar to FTL and most roguelikes honestly, Convoy has a simple set-up. Your spaceship has landed on a lawless post-apocalyptic planet, Omek Prime, in need of repairs. The parts you need can't be found in town, so you'll need to set out and find them. Semi-randomized turmoil ensues.

From your MCV, Main Convoy Vehicle, you'll be traversing the map in search of the necessary parts to fix your ship. I especially appreciate the subtle and not-so-subtle references from Compression Coil, Flux Capacitor, Hyperdrive Stabilizers and Self-sealing Stem bolts. See if you can match them all.

As you travel along the hex map, you'll encounter various radio signals and events, and you'll be given the option of how to handle them. If you find someone broken down do you use your parts to help fix their stuff or do you dispatch them and take what little they have for yourself? These items might be parts to upgrade your convoy of vehicles or simply some fuel to keep you moving. In addition to the random encounters, you'll also be tangling with the three various factions that are all vying for control of Omek Prime.

Eventually though, you're going to get into a fight, and this is where Convoy looks to be innovating something all its own. Obviously since all the vehicles are weaponized cars and trucks, combat takes part as chases down stretches of the road map. Not only do you need to manage your convoys positions and who they are shooting at, you'll also need to respond to hazards on the map itself. The combat looks like a clever mix of trying to time and position your weapons and skills for maximum effectiveness, while also dodging out the way of mines and rockets. You can, however, pause the action and issue orders as needed, but of course, if a unit dies it's gone for good and you might be headed back to the start menu.

While the game has already been accepted on Steam, the developers hope to leverage their Kickstarter campaign into completing a wish list of features including: more environmental hazards in the maps, ramming, and more units, events, weapons and content. The Kickstarter has another 25 days towards its €10,000 goal with an expected release February of next year.

Disclaimer: I'm not currently backing Convoy, but that might change in the near future. Just saying.