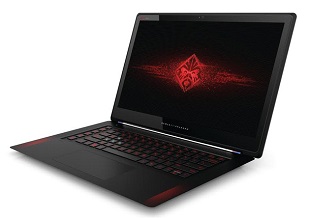 The Omen is 0.78 inches thick, has Intel and Nvidia inside.

What's this? Hewlett-Packard is getting back into the gaming hardware business? That certainly appears to be the case.

Originally teased/leaked back in June, HP's new Omen laptop is based on VoodooPC DNA that ol' Packard paid so much for back in the day, a gaming notebook that could pass as an Ultrabook in many cases. The 15.6-inch Omen is 0.78 inches at its thickest point, weighs 4.68 pounds, and is designed specifically to take on the likes of Razer's Blade, various thin offerings from MSI, and Alienware's new 13-inch notebook.

The guts? HP is going with an Intel-Nvidia duo, pairing a 2.5 GHz Core i7-4710HQ quad-core CPU (with Hyper-Threading) with a 2 GB GeForce GTX 860M GPU. Storage options are SSD through and through (likely M.2 drive options), and I/O includes four USB 3.0 ports, mini DisplayPort, and 802.11ac WiFi. Ethernet comes in the form of an included USB adapter.

The display is a 15.6-inch 1920x1080 touchscreen panel -- a bit of a drop when compared to the 3200x1800 panel on the Razer Blade. However, as HP points out, a lower resolution means a consistently higher frame rate, and since the Blade and Omen both use similar GTX 800M series hardware, the lower-rez Omen will pump out consistently high numbers. Even when you remove the Razer comparison, It's tough to count a 1080p panel an Achilles heel on such a small 15-inch form factor.

The thermals are also a completely custom job (this is not a rebadged Clevo or Sager, mind you), with the entire bottom of the Omen using vented anodized aluminum. Dual intake fans near the front push air through, and out the back of the unit (no hot air near the hands).

The included Omen software suite handles most of the customization you would want in a gaming notebook, from audio tweaks and mouse settings (if you're using the branded Omen mouse), to keyboard commands and lighting controls.

At $1,499.99, the Omen isn't the cheapest gaming notebook on the block, but its combination of style, diminutive size and respectable specs could justify the pricetag when the laptop ships later this month. That base price includes 8 GB of RAM and 128 GB of storage, which can be increased to 256 GB for an extra Benjamin. Other options include a 512 GB SSD, 16 GB of memory, and a 4 GB version of the GTX 860M.