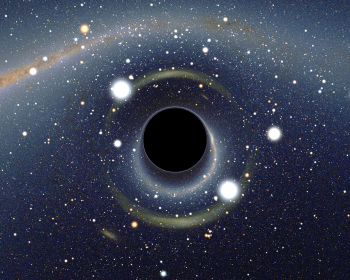 Astronomers were surprised to learn that the mysterious object they named G2 that passed by the supermassive black hole at the center of our Milky Way galaxy wasn't destroyed.

G2 was previously believed to have been a cloud of hydrogen gas, but given it wasn't destroyed by the close approach to the black hole, astronomers now believe it may actually be a pair of stars that collided to form one giant star surrounded by a haze of gas and dust.

"G2 survived and continues happily on its orbit; a gas cloud would not do that," said UCLA astronomer Andrea Ghez. "G2 was completely unaffected by the black hole; no fireworks."

The "fireworks" that Ghez is referring to would have resulted from the tearing apart of the hydrogen gas cloud by the black hole's intense gravity - an event that would have actually changed the state of the black hole.

Given these new findings, G2 may actually be an example of a newly-discovered class of stellar objects: binary stars that merge due to proximity to black holes.

"We're seeing a new class of stars near the black hole, and as a consequence of the black hole," Ghez said. "It's possible that many of the stars we've been watching and not understanding may be the end product of mergers that are calm now."

Hawaii's Keck Observatory collected the observations on G2, and the findings were published on Monday in the Astrophysical Journal.