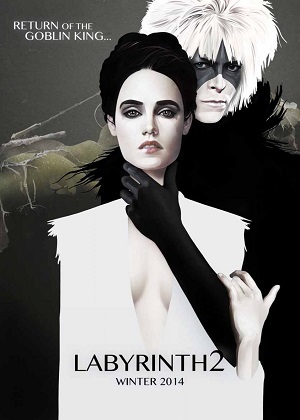 Movie sequels can be a really lousy thing. When you get down to it there are simply just some works of cinema that neither require nor benefit from a second (or fourth) chapter. That being the case, there are some films that arguably could stand to continue past their closing credits and there's no lack for film-goers wishing, hoping and praying their favorite flick might someday be the subject of an unlikely continuation.

Case in point, the pop culture art gallery iam8bit will hosting a new exhibit next week focusing in on would-be sequels as envisioned by artists creating faux movie posters. The exhibit will include pieces from more than 40 artists whose work will include imagined sequels for films such as The Rocketeer, Labyrinth, Spaceballs and many more. The exhibits themselves will be opening on November 13th at 7pm PST and will close down ten days later on November 23rd. Prints from the included art pieces will go on sale on November 14th. People interested in viewing the exhibit can RSVP on its Facebook page.

The question that obviously emerges from all of this is what move you'd like to see given the would-be sequel treatment. Just speaking personally, I'm still holding out hope for a sequel to Conan the Barbarian. And yes, I'm aware of Conan the Destroyer and the 2011 film. I feel that it's perfectly legitimate to include movies that need good follow-ups. What would your pick be and what do you think of the artwork that's already been unveiled (thanks ComingSoon!)?