"It tasted like orange with a Doritos after taste." 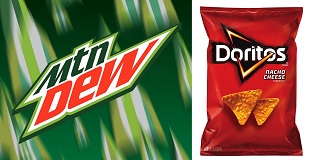 There's a lot of great news floating around on this crisp Friday evening. Grand Theft Auto V isn't going to ship with extra DRM! Blizzard has a new IP to swoon over!

But now that gaming high you're on comes crashing down, as Pepsi has confirmed that it's been testing Doritos-flavored Mountain Dew. With real human beings.

Yes, it's true. Reddit found it first (shocking!), and Quartz was able to confirm the rumor with a Pepsi spokesperson.

"We are always testing out new flavors of Mountain Dew, and giving our fans a voice in helping decide on the next new product has always been important to us," said the spokesperson in a press statement. "We opened up the DEW flavor vault and gave students a chance to try this Doritos-inspired flavor as part of a small program at colleges and universities."

Let's all take a moment to daydream about an actual Moutain Dew vault, buried deep under the Mountain Dew...mountain (which is next to the Tropicana orange grove), guarded by clones of the original Quaker Oats pacifist. (Sidebar: Did you know Pepsico has at least 22 billion-dollar brands? That's scary.)

Daydream over! The Reddit user who tried the New Dew goes to Kent State University (or at least tried it there). He said that the concoction, "...wasn't that disgusting. It tasted like orange with a doritos after taste. It tasted like straight doritos afterwards though. Weirdest thing I've ever drunken."

So who knows if this -- if we're being honest -- inevitable abomination will ever see store shelves. But with two brands so intertwined? It wouldn't be much of a shock...not as much of a shock as Mountain Dew Voltage, at least.