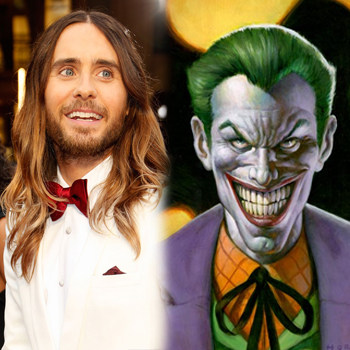 Warner Bros. feature-film incarnation of Suicide Squad, the cult-fave comic in which a top-secret government program that offers DC Universe supervillains commuted sentences in exchange for undertaking dangerous black-ops missions using their special powers, has been attracting serious star power in the form of Will Smith, The Wolf of Wall Street's Margot Robbie and Fury director David Ayer. Now, last year's Best Supporting Actor winner may be climbing aboard - as the most iconic DC Villain of all.

The Wrap reports that actor Jared Leto is circling the role of The Joker in the ensemble action film, which has yet to officially confirm which villains would appear as characters. If he takes up the role, Leto would become only the fourth actor to portray The Joker in a live-action film, following turns by Cesar Romero, Jack Nicholson and Heath Ledger.

The reports do not specify whether The Joker would appear as a member of the Squad or in some other capacity. Traditionally, the Suicide Squad (of which there have been multiple variations) is comprised of lower-tier villains like Captain Boomerang or King Shark (thus explaining, in part, how these guys keep getting out of prison) but modern incarnations have also featured more well-known heavies as well. Cara Delevigne, Gone Girl's Emily Ratajkowski and the aforementioned Robbie have all been rumored for the role of Harley Quinn; while Jesse Eisenberg's Lex Luthor from Batman V Superman: Dawn of Justice is also rumored to appear in order to tie the film more directly to the new DC cinematic continuity.