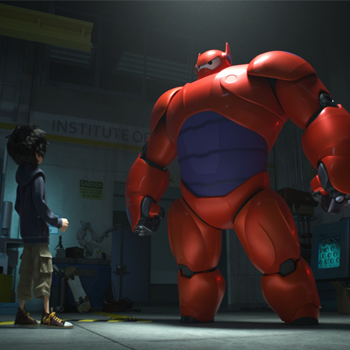 Nolan space-epic has a big Friday, Disney superheroes expected to overtake the weekend

Paramount's big-budget sci-fi drama Interstellar came out ahead (by only about $1 million according to some estimates) in what was widely predicted to be a tough race against Disney's kid-superhero adventure Big Hero 6. However, analysts are forecasting that increased Saturday viewership among families will carry Hero to a decisive first place victory for the weekend.

While both films are surging toward healthy $50 million+ opening weekend grosses, box-office watchers cite Big Hero 6's superior Cinemascore audience-polling grade (an A versus Interstellar's B+) and Rotten Tomatoes score (91% versus 76%, respectively) plus the aforementioned Saturday "family bump" for the projections. If so, the $165 million Interstellar will become the first film from director Christopher Nolan to fail to open in first place since Insomnia in 2002 - an inauspicious (though by no means disastrous) debut for what had been touted as one of the holiday season's heavy hitters.

Attention now turns to next week, where the 20-years-later comedy sequel Dumb & Dumber To will open with little in the way of mainstream box-office competition, as studios clear the deck for Hunger Games: Mockingjay Part I the following week.