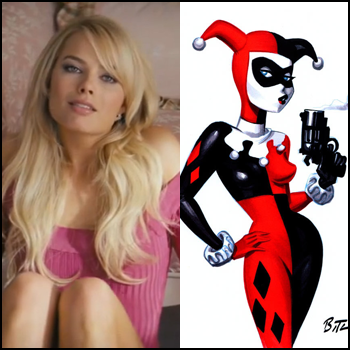 Hot on the heels of rumors that Jared Leto is circling the role of The Joker in the upcoming supervillain team-up film Suicide Squad comes word that DC Comics' other infamous grifter in greasepaint could well be joining him: Collider reports that Margot Robbie, last seen as blonde-bombshell Naomi Lapaglia in The Wolf of Wall Street, has been cast as Harley Quinn.

If true, it would make Robbie the first person officially confirmed for the project outside of Fury director David Ayer, though Will Smith (who appears with Robbie in the upcoming Focus,) Tom Hardy and Jesse Eisenberg (as Lex Luthor) have all been reported to be circling the film; which is based on a DC comic-book about a shady government program that commutes the prison-sentences of supervillains in exchange for them undertaking dangerous black-ops assignments.

Originally from Australia, Robbie was previously best known for the TV series Neighbours and Pan Am. The character of Harley Quinn was a creation of Batman: The Animated Series as a love-interest for The Joker (she was originally an Arkham psychiatrist named Harleen Quinzel), but became so popular that she became a fixture of the mainstream DC Universe almost immediately. The role was previously brought to live-action once before (though in a version that had abandonned her costume and nickname) by Mia Sara in the short-lived Birds of Prey TV series.

Suicide Squad, which Ayer has described as "The Dirty Dozen with supervillains," is due in 2016 following the release of Justice League