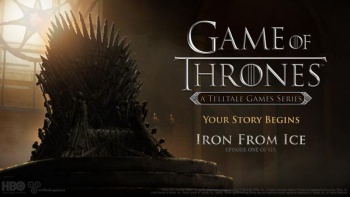 We still know close to nothing, much like Jon Snow, but we now know Telltale's Game of Thrones series is six episodes long.

This is one episode longer than some of Telltale's other game series. Both seasons of The Walking Dead are five episodes each, and The Wolf Among Us was also five episodes.

Previous teasers from Telltale indicate its game involves the Forrester clan, the Ironwoods, and House Bolton.

A Telltale PR representative hinted earlier that the new game series will premiere by the end of this year, and all signs from Telltale support that. We could be seeing "Iron From Ice" quite soon.