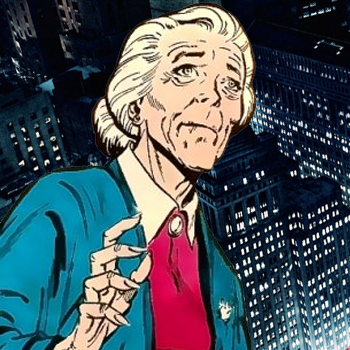 Oh, now you're just being silly

Update: Contacted by Comic Book Resources, Sony Pictures has denied that they are considering an Amazing Spider-Man spin-off based around the origins of Aunt May, calling the reports "a silly rumor" with "no validity whatsoever."

Original Story: Broken record time: Because of Hollywood contract law, Sony has to keep making movies about and/or related to Spider-Man on a regular basis or lose the rights to the character to rival studio Disney/Marvel. But with attempts to reboot the main series having more or less failed twice (with a third now delayed;) plans have shifted to spin-offs built around villains and yet-unidentified female heroes. But a breaking rumor, if true, could be the most unusual idea yet - are you ready for Spider-Man Origins: Aunt May??*

Believe it or not, the superhero scoop-masters at Latino Review (who knew who was playing The Black Panther a year ago) are claiming that this is Sony's new plan for extending the Amazing Spider-Brand: An origin-story that would reveal young May Parker's (possibly back when she was still May Reilly) secret past in "Some sort of espionage story in the vein of AMC's Mad Men." It is not known whether or not this reimagining of the character is inspired by Marvel's upcoming Agent Carter series, or if Sally Field would be sought to reprise her role as the (present-day) Aunt May in some capacity.

Despite having been part of the Spider-Man franchise from the beginning, little is actually known about the life of May Reilly Parker Jameson in the mainstream Marvel Universe prior to adopting her sister's son, Peter. A 2003 series called Trouble, depicting her and her sister Mary as promiscuous teenagers (and May as the actual biological mother of Peter!) was intended to become her official backstory but was scrapped because of negative reception by readers. She has also seldom been depicted as involved in any action or espionage scenarios (Richard and Mary Parker were CIA Agents in the comics), save for a single adventure where she (briefly) attained the power of The Silver Surfer and became Galactus' new herald, "The Golden Oldie."

*Not the actual title (probably.)