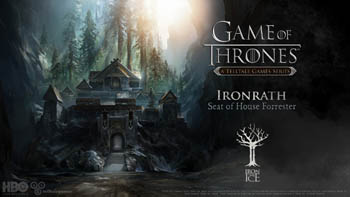 The playable characters in Telltale's Game of Thrones have not appeared in the HBO show, but they are canon in George R.R. Martin's A Dance with Dragons.

Telltale Games has just lifted a curtain on some details for its upcoming Game of Thrones episodic game. Game of Thrones will be told in six episodes among five playable characters in House Forrester as consequences can affect much more than an individual character.

As revealed yesterday, the game will be told in six episodes. The game takes place during The War of the Five Kings, and the game begins around the end of season three of the HBO show and ends just before season five. All five characters are members of House Forrester, either as family members or a person in service to the House. The characters are scattered across Westeros and Essos, and players will have the difficult task of preventing House Forrester's destruction.

Game of Thrones' scope is huge, and choices can have far-reaching consequences. One playable character's actions can affect all of House Forrester. When playing the game from five different viewpoints, keeping House Forrester safe will be tricky.

House Forrester was featured in George R.R. Martin's A Dance With Dragons. While Telltale's game series is based on the HBO adaptation of the novel series, House Forrester has not made an appearance in the show.

The House is located in the north of Westeros. As Bannermen to House Glover, they are loyal to the Starks.

Familiar to many Game of Thrones fans will be King's Landing and The Wall. Other locations in the game include Ironrath, a stronghold built by Cedric Forrester over 1500 years ago. As a signal of strength and endurance of Ironwood, Ironrath is on the edge of the largest ironwood forest in Westeros. The adverse conditions in the North have only strengthened House Forrester, and the House uses the ironwood to build many of the best ships, weapons, and defensive structures.

Telltale still hasn't given a concrete date on when Game of Thrones' first episode will launch, but it will be available before the end of the year. The game will premiere on PC, Mac, PS4, PS3, Xbox One, Xbox 360, and iOS.